Panlab Hot/Cold Plate Analgesia Meter is based on a metal plate which can be heated to 65°C and cooled to -3°C (with an ambient temperature between 20°C and 25°C). An electronic thermostat maintains the plate's temperature and a front panel digital thermometer displays the current plate temperature.

The animal pain sensitivity resulting from exposure to heat or cold is tested by placing the animal on the surface of the plate and starting a built-in timer. The operator stops the timer at the instant the animal lifts its paw from the plate, reacting to the discomfort. The front panel timer then displays the number of seconds the animal took to react. Animal reaction time is a measurement of animal resistance to pain and is used to measure efficacy of analgesics.

The plate is designed to be very simple to use at very fast to reach the set temperature (as example From ambient to 4°C, the most used threhold value, it takes less than 10 minutes, and from 4°C to 65°C it takes only 5 minutes) . Metrology wise, is accurate to less than 0,5°C (EEC metrology standard) and perfectly constant in the animal holder system. The preset temperature will not change for more than 0,1°C when a 400g rat is placed on the plate, and return to the set temperature is almost immediate.

In addition, the instrument can be adjusted to be used for "TEMPERATURE RAMPS" , predefined by the user, this feature is mainly used for studies with telemetry implants. In addition to displaying the reaction time, the Cold/Hot Plate Analgesia Meter is capable of sending the same information via USB interface to a computer.

The operator can start and stop the timer with the front panel start/stop switch or with the included footswitch, which allows "hands-free" operation. 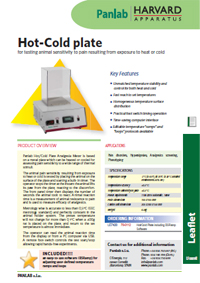