for assessing social hierarchies in rodents

The apparatus consist of a narrow clear Perspex tube with two removable central doors. The tube is provided with two supporting paws for ensuring its stability during the test.

After being habituated to run through the tube individually, two mice are placed in the tube into opposite ends. Once both mice get close to the doors, the doors are opened and the dominant mice will makes the submissive mouse reverse until it get out of the tube. When one animal has all four paws out of the tube, it is declared the loser while the animal remaining inside the tube is the winner, ending the match.

The number of wins is reported as a percentage of total number of matches. Additional information about the social hierarchies can be gained with the measurement of additional parameters such as duration of each match, latency to exit the tube, and more. 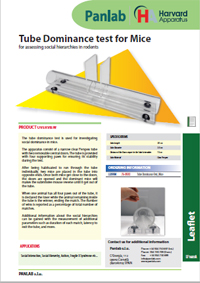