For screening anxiolytic substances in mice

The Aron test or four plates test is an animal model of anxiety in which the exploration of the novel surroundings is suppressed by the delivery of a mild electric foot shock.

Basically, the apparatus consists of a cage floored by four identical rectangular metal plates (8×11 cm) separated from one another by a gap of 4 mm. The plates are connected to a shocker unit that can generate electric footshocks. 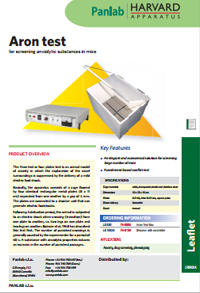